It’s time to recognize the November Zeal Credit Union November Athletes of the month! Congratulations to Ti’Syn Callahan & Da’Jion Humphrey of Southfield Christian! Ti’Syn and Da’Jion will be receiving a pair of wireless bluetooth speakers and winners certificate courtesy of Zeal Credit Union.

If you voted in this month’s contest, you could win a $100 gift card courtesy of Zeal Credit Union. The winner will be announced in the next couple of weeks and will be notified via email. Check out Zeal CU on Facebook and Twitter! #ZealTheLove 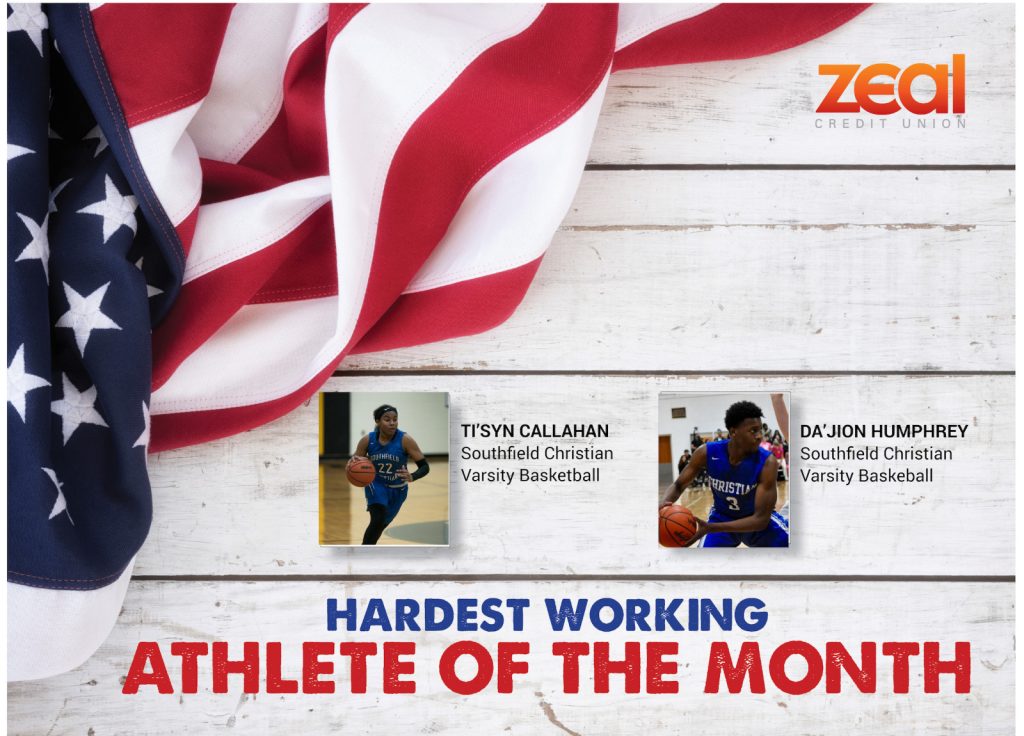 Da’Jion Humphrey – Southfield Christian – Basketball
Humphrey has averaged a team high 23 points and 8.3 rebounds a game through the 1st 3 games of the season. The Holy Cross signee had a season high 26 points in the opener against West Bloomfield and he helped the Eagles to their 1st victory by defeating Detroit Edison 61-52.

Ti’Syn Callahan – Southfield Christian – Basketball
Callahan has led the Lady Eagle Basketball team to a 4-1 start while averaging a team high 21.6 points a game. She had a season high 27 points including 5 3 pointers in a 53-22 victory against Melvindale on December 16.

Female:
Ryann Brand – Madison – Volleyball
Ryann has show great sportsmanship on and off the court. Ryann has maintained a 4.0 GPA during the season and has a 3.7 GPA overall.

Sydney Hendrix – West Bloomfield – Basketball
Sydney has had an outstanding performance on the court and in the classroom. She is currently averaging 13 points and 12 rebounds.

Kendall Zoulek – Shelby – Basketball
Kendal is stepping into the leadership role as a sophomore for her team.

Male:
Adam Long – Madison – Football
Adam is a 4 year starter on the varsity level. During his 4 years he has shown great leadership on and off the field. Junior year he was All-state A; Senior year he was second team all-state.

Hunter Soper – Cros-Lex – Basketball
Hunter is off to a great start to the Varsity Basketball Season. Off to a 2-0 start; high rebounds. Including a highlight of an alley-oop slam vs St. Clair.

Logan Claeys – Shelby – Basketball
This is Logan’s 3rd year on varsity and he had worked hard to improve himself as well as his teammates.